Visit to the Ammerlaan

On June 26th 2019 the GEOFOOD team visited the geothermal heated greenhouses run by  Ammerlaan TGI in the Netherlands.

Ammerlaan is a family owned company which was founded by the Ammerlaan brothers in 1959 and has grown to become an ornamental nursery with over 6 hectares of modern greenhouses. 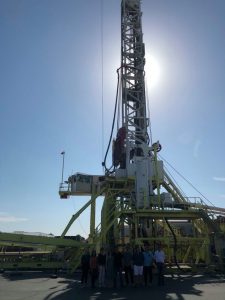 The geothermal well at Ammerlaan.

Ammerlaan is the first ornamental plant nursery to use geothermal energy in the Netherlands, making the company even more sustainable.

“Ammerlaan TGI has been a horticultural grower of potted plants for decades, and is currently exploiting 6 hectares of greenhouse with tropical green plants. In 2010, Ammerlaan was one of the first Dutch greenhouse growers that installed a geothermal well, and since then has been utilising their own geothermal heat and gas, as well as distributing energy to neighbouring companies and neighbourhoods. Ammerlaan TGI is operating a large scale greenhouse with a geothermal well, supplying heat to his own as well as neighbouring operations. The company will contribute the temperature data of their geothermal well for developing the Geofood model, and will serve as a geothermal advisor to the other project partners.”

This project is part of Geothermica